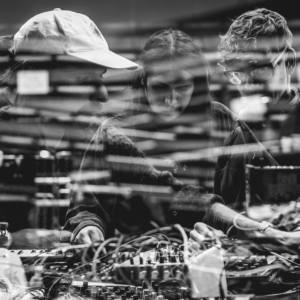 To read on The Quietus

To see the video teaser

Over the last 10 years, playing all over the world, they each acquired a reputation for putting the audience into a trance during their solo acts. Those 3 thus merged into rare electronic band to extend the boundaries of their solo experiences.

Dance emerges to form a collective celebration, a contemporary ritual through hyper-rhythmic music, long polyrhythmics. Contemplation settles with long improvised forms— ambient, industrial, hybrid experiments, for an expedition to new sound territories where electronics, mechanics and the organic mix up. From one polarity to another, from the most intense to the most delicate, there is no limitation, everything is to be explored, in an unexpected journey.

A.N.I. breaks down barriers to create a unified body while settling in the heart of the audience for direct exchanges. By opening up to spontaneous creation, things happen in the present and listeners experience more than just a performance.

To achieve this, they use an arsenal of machines: samplers, prepared turntables, synthesizers, modular, drum machines, effects, voices, etc. These interconnected machines are seen as communicating networks, a real interacting ecosystem that goes beyond sound superposition, where each individual affects each others sound.