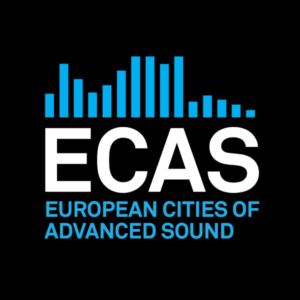 ECAS was co-funded by the Creative Europe Programme of the European Union.

ECAS was a five-year project organised as a network of independent non-profit organisations across Europe, all dedicated to advancing sound cultures, music and related arts.

Its goal is also to support members in their activities to develop and promote independent music and sound creation within their specific localities.

Beginning in 2006, the ECAS network has brought together a large number of cultural events from different European countries with a commitment to supporting and nurturing cultural connections through advanced sound. The focus is upon cultural festivals and events that support emerging cultural forms and new forms of audience participation. ECAS is the first organisation to focus on promoting advanced sound as having a common European cultural heritage.

Commencing in 2010, the network has been funded with support from the Culture Programme of the European Commission, to deliver a five year action called Networking Tomorrow’s Art for an Unknown Future.

The objectives to be achieved as part of the action are:

• To commission world-class inter-cultural artworks and present them in different trans-national settings.

• To support ‘bottom-up’ or citizen creativity and innovation, and provide pathways from ‘prosumer’ to professional.

• To test different engagement methods and engage large numbers of people (hundreds of thousands or millions) by staging events that are themselves experimental and involved in nurturing new cultural forms and technologies.

• To increase the mobility of artists, audiences and professionals.

• To build stronger trans-EU connections by consolidating the ECAS network.

• To explore new methods of collaboration for people working in the cultural sector.

• Cross-cultural – to support musics that have grown within migrant communities, to open marginal sounds up to a bigger audience.