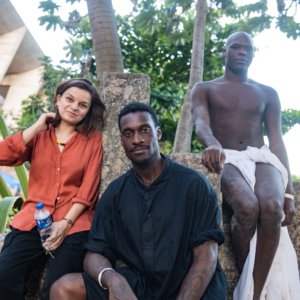 Video of the 1st serie here & below:

In a climate of National and International insecurities, one of the greatest contemporary challenges is the birth of new communities. The Ceremony is a Novas Frequências (Rio de Janeiro) performative action that gathers Loïc Koutana (BR/FR), NSDOS* (FR) and Zorka Wollny (DE/PL). Developed in collaboration with ICAS (International Cities of Advanced Sound) festivals CTM (Berlin) and Maintenant (Rennes) with the support of Goethe Institut and French Institute, the project present ideas on migration, identity, minorities and space specificities through collective performances in three installments. The Ceremony wants to celebrate multiculturalism in a current time where respect, solidarity and human rights seems in danger.

Four years ago, model Loïc Koutana traded Paris, his hometown, for São Paulo. It was in Brazil that this French artist of African origin developed not only his modelling career, but his career as a contemporary dance performer, acting as one of the main names of São Paulo’s underground nightlife with Teto Preto, Laura Diaz’s group, one of the creators of Mamba Negra. Koutana is a multi-artist, curator and also a youtuber. Soon he will be releasing his first album “Ser”, produced by Zopelar.

NSDOS (based in Paris)
Hacker and electronic musician

After dance studies, NSDOS, aka Kirikoo Des, sought to create sounds on which to pose his movements. He then had to imagine a new sound order, an alternative approach to music – by abstraction. Sometimes called the “hacker of techno”, the artist distorts technological tools creating the link between machines and matter. He collects living data, using sensors or interactive devices and injects them into the rectilinear skeleton of electronic music to make an organic matrix. NSDOS invites the public to push back with him the limits of the body, objects and sounds.

ZORKA WOLLNY (based in Berlin)
Composer and activist

Zorka Wollny creates acoustic compositions for institutions, factories and empty buildings. Her works inhabit a space between art, theatre and contemporary music, and are always closely connected to the historic and functional context of specific architectural sites. Her works have been exhibited at the most prestigious contemporary art institutions and music festivals all over the world.

From November 18th to December 8th, 2019, Novas frecuencias created an Temporary Autonomous Zone to do experiences such as workshops (coding, dance, singing, field recording and vogue), conversations, a pirate radio station, body movement practice, etc… They could count on the presence and contribution of 15 participants with their creations and creative processes. Throughout this TAZ, the material gathered allowed to build a final performance entitled THE CEREMONY, which 1st serie took place on December 8th at the Museum of Modern Art in Rio de Janeiro (MAM-RJ).

The open call was open to collaborators and performers such as dancers, writers, musicians, thinkers, researchers, activists and everyone interested in the theme of the performance. It was particularly aimed at people involved or with a migration background, to hear their stories as well, without prerequisites and with free participation. 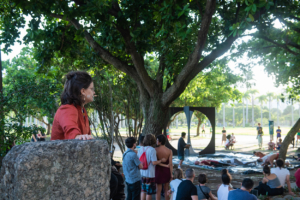 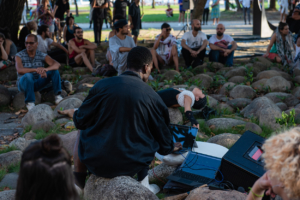 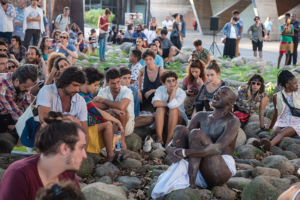 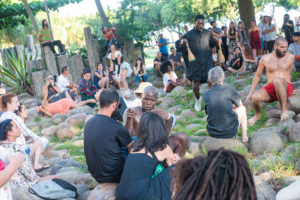 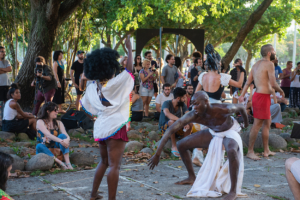 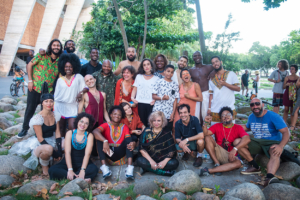 *NSDOS was a SHAPE artist in 2017. SHAPE platform is an initiative co-funded by the Creative Europe Program of the European Union.